In this work, molecular separation of aqueous-organic was simulated by using combined soft computing-mechanistic approaches. The considered separation system was a microporous membrane contactor for separation of benzoic acid from water by contacting with an organic phase containing extractor molecules. Indeed, extractive separation is carried out using membrane technology where complex of solute-organic is formed at the interface. The main focus was to develop a simulation methodology for prediction of concentration distribution of solute (benzoic acid) in the feed side of the membrane system, as the removal efficiency of the system is determined by concentration distribution of the solute in the feed channel. The pattern of Adaptive Neuro-Fuzzy Inference System (ANFIS) was optimized by finding the optimum membership function, learning percentage, and a number of rules. The ANFIS was trained using the extracted data from the CFD simulation of the membrane system. The comparisons between the predicted concentration distribution by ANFIS and CFD data revealed that the optimized ANFIS pattern can be used as a predictive tool for simulation of the process. The R2 of higher than 0.99 was obtained for the optimized ANFIS model. The main privilege of the developed methodology is its very low computational time for simulation of the system and can be used as a rigorous simulation tool for understanding and design of membrane-based systems. 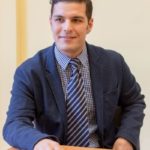