Article in Capital, Market and Economy By György Csepeli (Senior Researcher of iASK) 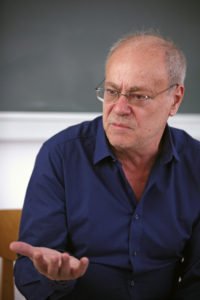 Marx saw it correctly that the factories that emerged as a result of the first Industrial Revolution and the machinery they cut the worker off from the object of his work and put him in such a process the rules of which he did not set. On the other hand, and Marx did not see this, or did not want to see, the productivity of work increased as a consequence of the breakage, people started to move to live in towns, they started to have more free time, the number of workers became smaller and smaller while the number of people employed in services, management and in intellectual jobs increased. In the course of the second and third Industrial Revolution, mass production and later automation accelerated these processes.

The ubiquitous Internet connects the movement of people and things and makes it trackable and controllable. Networked artificial intelligence combines a new generation of robots that can learn and anticipate beyond programmed tasks.

As a result of healthcare, cultural, educational and governmental services transferred onto the ubiquitous Internet there is a significant increase in the efficiency of performance. The endpoint is in every case the user whose unique needs are met by the product and the service on a level never experienced before.

Only that society remains competitive which, by creating a culture of research and development, keeps pace with the innovations dictated by the digital economy of networked artificial intelligence.

The transfer of the bulk of social interactions onto the Internet makes the economic, cultural and political organizations vulnerable to technology. A particular advantage is given to those who penetrate the systems without the risk of being exposed to deception, manipulation or fraud. Earthquakes, floods, and hurricanes make the Internet-connected machine-to-machine systems particularly vulnerable, the failure of which can bring the society back to the stone age in a moment.

An unanswered question is what happens to the people whose work is taken away by the 4.0 Industrial Revolution? Increased efficiency makes it possible for unemployment not to mean unbearable existential burden. However, there is no recipe for how redundant people can be relieved of the feeling of redundancy caused by work and joblessness. The winners, limited in number, of the 4.0. Industrial Revolution will be the highly qualified, mobile “netocrats” who plan and continuously develop the tools of networked artificial intelligence to perform specific tasks in given areas of ​​activity (Bard, Söderquist, 2002). The vision and scope of a large number of immobile losers left out of the mainstream of continuous technological renewal narrows and the focus of their goals is to maximize their own physical and mental well-being. It is still unclear how the inequalities between regions and groups can be bridged in the future.

In spite of their vulnerability and volatility, the economic operations created by the 4.0 Industrial Revolution make the dream of physical and psychological well-being accessible to society though held utopian before. However, the new, technologically perfect world burns the bridges linking the future with the past behind it. Texts, images, and musical tones are lost in meaning, whose references have been fed on the sufferings and joys of people who lived in the past. People in the new age cannot do anything with the cultural tradition, which not only in the content but also in the organization and logic is alien to them. Everything will stay accessible but there will be no one who can understand the messages. There will be a new civilization born, in which there will be no space for the goals, only for the tools.

The 4.0 Industrial Revolution cannot be overlooked. Human evolution is not over yet. Evolution is generated by man himself through intelligent networked devices created by him. László Ropolyi refers to the new being as a “third reality”, in which physical and metaphysical entities appear together in an inseparable unity. The “third reality” universally integrates knowledge and users, enabling the creation of collaborative knowledge communities of choice, which dramatically increases the efficiency of the system. On the basis of data continuously flowing in, it is possible to follow and predict the states in the “third reality” segments. The follow-up, prediction and feedback sequence based on Big Data models result in radical and sustainable quality improvements both at the life-world and at the system level. The customized treatment of diseases on a generic basis increases the life expectancy of individuals.

The world arrives in a state of complete interconnection where things and people will equally become part of the network. Parmenides’s vision of 2500 years earlier will be confirmed, according to which

the existing “is wholly related as the existent touches the existent. Existing things form a unity, namely the unity of Being, which is complete” (Steiger, 1998).

With this turn, Western thinking is given the opportunity to return to its beginnings when man released from his tribal-community ties first asked: “Now what is this?”

Answers to the question “Now what is this?” in the clutches of the third reality arising from the 4.0 Revolution, however, give rise to unrest. The data generated in the state of complete interconnection and the algorithms built upon them will first make man’s physical work redundant and then will also redeem the intellectual work of the human being. Heidegger’s status called “the forgetting of Being” comes to fruition, which is characterized by a “total insensitivity to the ambiguity”, “the ignorance of the conditions, and hence the idol-worship of certain conditions, turning them into unconditional, the extension of plant operation, the denial of questioning and the denial of real questions, a complete ignorance of the finite” (Schwendtner, 2016, p. 163).

The network of robots that have been resuscitated by learning algorithms is the super-intelligence that controls the whole world. It is the consummation of computation, speed, organization that is mass-produced, but at the same time extends to every individual (Bostrom, 2015). Heidegger refers to this danger by the term “machination”, which he made long before the era of the 4.0 Industrial Revolution began. The aim of this overwhelming mechanism trying to cram everything underneath is to cram the whole world underneath it.

The utilization of the tools of networked artificial intelligence for warfare purposes is the source of unrecognizable threats. It belongs to the nature of planetary machinations that it does not tolerate power outside itself, which it cannot absorb, it will destroy.

The time for machinations on the planetary scene is mere speed, instantaneity and simultaneity, time as history disappears.

It is not yet known whether the technological changes in man’s entire historical space mean the end of human existence or a new beginning. The renewal of the West can only be imagined if the space for the individual remains, in which he can say NO to the role of the “technicized animal” offered for him by the machinations and can restart the beginning.